I purchased this four pocket officers tunic from ebay a few years ago, with my museum work I have seen and handled a lot of genuine WW2 uniforms. There are a number of BD tunics offered for sale on ebay but most are fakes or original uniforms with the BD patch added. I took a gamble on this one and fortunately it paid off!, once the uniform arrived it looked and felt right, it had a number of moth holes all over it, but personally this does not bother me, it is all part of the history of the uniform and at least it proves a bit of age. To double check I posted a request on an online forum dedicated to militaria requesting more information on genuine WW2 era Bomb Disposal patches. To my joy a gentleman replied that he had recently sold an original Bomb Disposal uniform on ebay a few weeks previously, this was of course the very tunic I had purchased! Without letting on it was me that had purchased the tunic I questioned him further and he said he knew it was genuine as it he had pulled it off a rubbish dump! With this information and based upon my careful inspection I am entirely happy that this is a genuine example of an officers Bomb Disposal four pocket tunic. The rank is of a Lieutenant and the printed blue cross on a red shield patch on the left and right shoulders were added after the cessation of hostilities at the end of WW2 denotng the 21st Army Group Troops in France, in the ‘Rear Maintenance Area’ adopted the GHQ & L of C Troops shield.

BD personnel not only had to deal with Luftwaffe fuzes, in late 1944 BD squads were tasked with the dangerious job of disposing of thousands of British Anti-tank mines that had been laid all round the coastline of England on beaches and piers as part of the anti-invasion plans. By late 1944 the threat of invasion had passed so removal of these mines fell down to the men of Bomb Disposal.

This very heavy Bronze Anti-Magnetic Shovel is marked 719 BD, a quick search on the internet suggests this unit never existed. But I found reference held with the Imperial War Museum in London that records an account from a veteran who served with this unit. Please see photo at the top of this page which appears to show one Sapper holding this type of shovel.

Variety of tools believed to have been used by Bomb Disposal in defusing parachute mines.

If anyone has further information on these toools I would like to hear from you.

Used to detect harmful levels of Carbon Monoxide gas where a bomb had exploded underground often without any form of detection on the surface. A number of Sappers lost their lives by Carbon Monoxide possioning. When excavating a bomb a probe was often used to follow the "soft spot" of a bombs path in the ground. Sometimes this probe could penetrate a "camouflet", allowing carbon monoxide gas under considerable pressure to rush up into the shaft above. One good lungfull of this gas would incapacitate a man & after a few seconds he would be dead. Sometimes several lives could be lost trying to rescue the unfortunate man.

17th December 1944. He is buried at ISLINGTON CEMETERY & CREMATORIUM. If anyone has any further information on "Josh" I would love to hear from you.

A quality reproduction crabtree discharger - if you know of an original available then I would like to hear from you!

WW2 period fuze locking ring extractor (spanner). This example stamped with 15 BD Company which operated in the London area & dealt with a number of UXB's that feel in the grounds of Buckingham Palace. 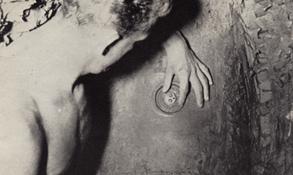 The subject of bomb disposal in World War Two is a very complex & lenghty histroy. Below I will give a very brief outline of the early days of bomb disposal. The subject of unexploded bombs quickly developed into a battle between the scienctists on both sides to find ever more ingenious ways to out do the foe. The men of the Royal Engineers Bomb Disposal were stuck the in middle of this secret war & for many it cost them their lives.

At the beginning of World War Two, little

preparation had been made for the event of

unexploded bombs or UXB's. Among the men

drawn in by the expansion of "Bomb Committe"

were a considerable number of volunteers.

A majority were simply Royal Engineers who

found that they had become bomb disposers as

the result of routine postings.

The life expectancy of a RE Bomb Disposal officer was just ten weeks at the height of the bombing raids. All BD personnel were allowed to apply for tranfer to another service after 6 months of service in bomb disposal. Till the end of June 1940 BD sections dealt with UXB's by the only means available to them. They would uncover the bomb by cautious excavation, remove or try to remove the fuze locking ring - often using a cold chisel & hammer. Then if the bomb had remained quiescent under such treatment, extract the fuze & gaine.

By June 1940 the first two pieces of bomb disposal equipment became available, these were the Crabtree & Universal Key. The Crabtree was a device like a clamp that attached onto the fuze boss, it depressed the charging-plungers & allowd the charge from the fuze to short-circuit until the condensors were discharged rendering the bomb relatively safe. A piece of string could then be tied around the crabtree enabling the BD engineer to pull the fuze from the fuze pocket at a safe distance. The Universal key was a steel bar which could be slid two adjustable lugs that could be fitted into the key-ways of the locking-ring. By turning the operator unscrewed the ring so the fuze & gaine could be removed.

A third & most valuable appartus was the "Steam-sterilizer", a hole was cut in the bomb casing away from the fuze pocket, & the comparatively inert main filling was emulsified by the injection of steam & drained away. 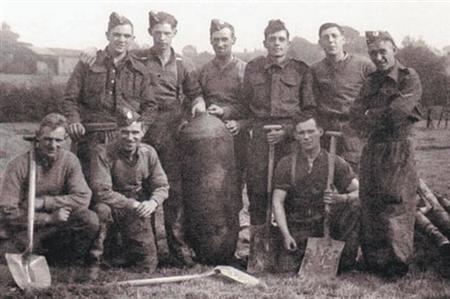 This SC 50 kg tail fin is from a 50 kg bomb that failed to explode at East Hoathly, Sussex. It was detonated by BD personnel in situ, this relic was taken by Bob Fry at the time after the explosion, it was still hot!