LMB parachute retaining cone found during dreging of the River Thames, these were jettisoned in the air to release the parachute contained within. 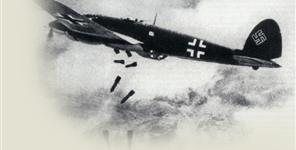 During World War Two the Luftwaffe developed a range of Parachute Mines or Landmines as they were called by the Civil Defence. These were in actual fact Sea mines, but it was quickly discovered by the Germans that these weapons could also be effective on land based targets as "blast" bombs. There were two sizes of Magnetic Parachute Mines, the Luftmine A (abbreviated LMA) of 500kg which was 5ft 8in long & the Luftmine B (LMB) which was 1000kg & 8ft 8in long. These magnetic mines were constructed of aluminium, with a domed parachute housing which jettiosoned in the air to deploy a large green or red parachute. They were fitted with the Type (34)B fuze, & were detonated either by impact or by a disruption to the magnetic device contained inside, bomb disposal used a variety of bronze anti-magnetic tools to deal with UXB Landmines.

Later other types of mines were used against built up targets such as the steel cased SB 1000kg parachute bomb which was designed to explode just above the ground causing devastating damage to buildings by the blast effect of the weapon. The SB 1000kg contained a single fuze pocket with the type (55) fuze normally being used which had a long wire to a nose switch on the front of the bomb.