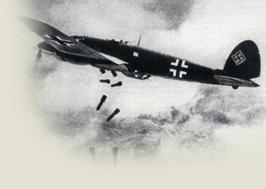 The Sd1 was dropped in various sizes of containers & had a limited use within the United Kingdom but were widely used on the Russian Front.

Anti-personnel (fragmentation) bombs were designed to be used

against troop concentrations & also on airfields etc. Some were fitted with