I own or have seen: 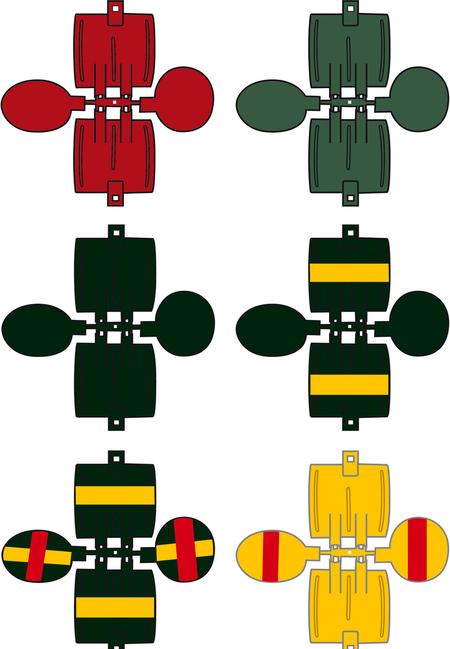 SD2's to be dropped were standard field grey all over (by this I mean the grey/green as incendiary bomb tails ). (type 41 fuze)

It was after the invasion of Russia that the Germans soon became aware that unexploded SD2's were a 'double-edged sword', as their own troops fell victim to the sensitivity of the fuzes. Being painted field grey they were hard to seeand held up troop movement. [remember at this stage only the type 41 fuze was being used and the bombs were meant to explode shortly after dropping]. It is at this time the colour changed (as seen in the original manual - the amendment being made in September 1941). At this point the colour was as follows:- existing bombs (field grey) had bright yellow stripes added and in some cases a red stripe as well. The yellow stripe was for recognition purposes, so they could be spotted more easily - (the red stripe may be for the same purpose or indeed to signify thick case bomb - I am not sure about this as yet??) *I have seen original examples with just the red stripe, so it could indeed signify thick case bomb, as they are not so easy to see as the yellow stripes ! - why they are like this I dont know* the newly manufactured bombs were to be painted bright yellow with red stripes.......  again for recognition purposes!! It is often said that the yellow painted bombs were for use on corn fields, not true - they were simply for the Germans to recognise unexploded bombs and avoid them. The SD2 was an attack weapon at thetime - the Germans were advancing on all fronts and as such venturing into ground in which these things had been dropped.

With the development of the type 67 and type 70B fuzes in 1942 the colour of SD2's changed again (as far as I am aware only for the bombs using these two fuzes?). I have seen reference to field grey being used on the 70B fuzes and a beige grey to be used for the 67 fuzes, however examples of complete SD2's I have seen which have both fuzes have no difference in colour - field grey seems to be the norm. Of course the SD2's armed with the type 67 and 70B were to be used 'behind enemy lines' - that is to say where no advance was expected to occur - examples being in Malta late 1942 and UK 1943.

I am not sure if the yellow coloured SD2's ever stopped being used or wether they were only used with the type 41 and 41A fuzes, however by mid '43 the tide of war was changing and the Germans were for the most part on the defensive, as such if the SD2's exploded or not it would not affect them in the same way.

This is basically it as I understand it, however there are further colour variations, red was definately used on the Exercise or drill examples marked Ex on the end disc.

This page is devoted to the complex subject of Butterfly Bomb Colours, based on observations on original surviving Sd2 Wings, information extracted from Civil Defence Bomb Reconnaisance and Bomb Disposal wartime documentation. Also thanks to Kevan Hinson for his indepth observation on Sd2 Colours.