Photographs taken at a public talk and demonstration held at the museum in 2015 remembering and educating the public about the heroic actions of the wartime Bomb Disposal units of the Royal Engineers. Steve Venus is photographed on the left together with museum curator Daniel Hunt on the right. Top picture shows the talk and demonstration in full swing. 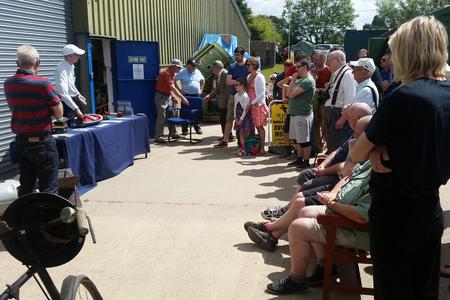 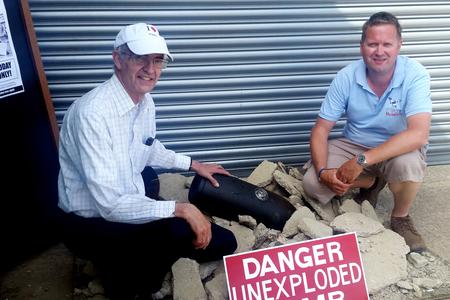 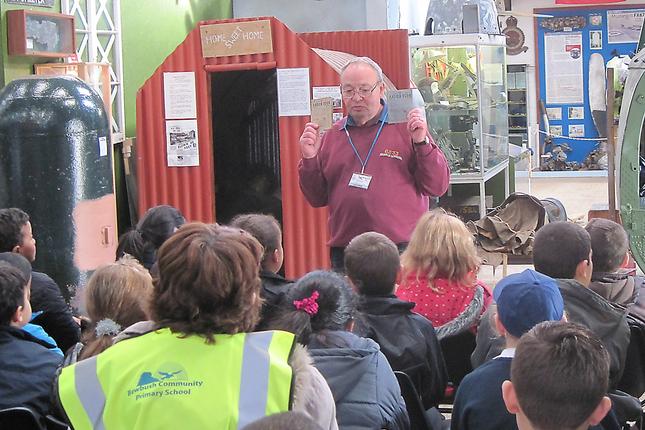 A museum Volunteer talks to a group of school children about air raids, rationing & the Blitz. Many of my items in my collection are used during these talks & much of my collection is on display at the museum. Note our original Anderson Shelter in the background, children can go inside & hear the sounds of the Blitz - one teacher commented it was the quietest they had ever been!

About Me & my interest in the Blitz

From a very young age my interest in World War Two

was inspired by hearing stories of the Air Raids of the

Blitz from my Grandad. A family member was also killed

when a German Bomb fell on Petworth Boys School in

Since then I have been a collector & restorer of items from the Home Front & relics associated with the Air Raids including items such as German Bomb Fuzes, Bomb Tail Fins, Bomb Cases, & items of Shrapnel & other relics which were often collected by school children after the raids.

A large part of my collection is on public display at the Wings Museum where it can be appreciated by others. These relics now act as a form of remembrance & help teach younger generations of the horrors of war. I have also in the past sourced inert air dropped ordnance ralated material for other museums and displays. The Museum also hosts a dedicated talk and demonstration on the heroic efforts of the wartime bomb disposal units of the Royal Engineers. The museum also conducts a number of talks to schools and other youth organisations, where items from the collection are used to illustrate these talks.

"I am always interested in hearing from people that have any items of WW2 inert Air Dropped Ordnance from photos, shrapnel, bombs, fuzes, relics, & items of bomb disposal equipment etc".